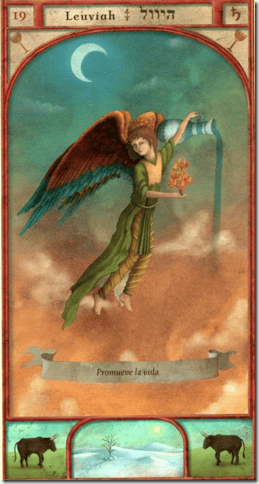 Lesson: Make good use of your creative imagination

He pulled me out of the pit of death,
from the mud and the swamp;
put my feet on a rock,
and planted me on solid ground.

[sociallocker id="356″]He's kind, cheerful, modest in his words and his manner. He will endure all adversities with patience and resignation because he knows that this is a form of material and spiritual evolution. Extremely curious, he is willing to learn from any experience he has had. He will have cultural refinement, will love music, poetry and the arts in general. He will have Angelic protection against adversaries or those who want to harm him and this protection is a great wall of etheric light invisible to the eyes of ordinary people. He will have complete control over the events of his life and will attain the grace of God when he remains firm and determined in the struggle for his ideals. [/sociallocker]

Leuviah had everything a young man of his age could want, a family that loved him, friends to play with and was adored by the girls at his school.

However, he was not totally happy, only one thing prevented him from doing so, only his bad memory.

He didn't care much if it was only important for him to study, he spent twice as much time as his classmates, but in the end he managed, albeit with effort, to pass. What worried him most was that he didn't remember anything about his childhood, it seemed as if he had never been small and that made him feel a little lost.

Sometimes he consoled himself when he saw with no little disappointment how he had forgotten the most elementary things.

This problem obsessed him to such an extent that he suffered nightmares in his sleep. One night when his soul was in transit through the Dream World, he had an experience that would change his whole life. But let's see what happened to him.

He saw himself in a very dark room, lit only by a candle that gave off a faint light. Although he recognized himself, his face represented age. He lay on his knees and held a sharp sword in his hand. Suddenly his hands rose and the weapon entered his body, ending his life.

Lauviah suffered a strong impression, but that voice came to reassure him.

-Lauviah, look at that body and see what will happen.

So did the dazed young man and saw a form of light coming out of him, it was the same but bright. That light took a path that awaited him and in it he found an instructor who explained to him that he had made a serious mistake and that to rectify it he should be born again and die again, because that suicidal death had interfered with his evolution, making him forget everything he had learned, and if he did not return to that world soon, he would not be able to give back the memory of what he had learned.

In this way Leuviah saw how that shining light was reincarnated in a new body that abandoned it when it counted only a few hours of life, returning again to that world of light. Already in him, that soul received the memory he lost, warning him:

- When you are born again you will forget things, perhaps many things, but be assured that you will not forget anything. Life must never be attempted!

Leuviah woke up very impressed but happy. She no longer cared about forgetting some things, for she had been able to remember the most essential things.