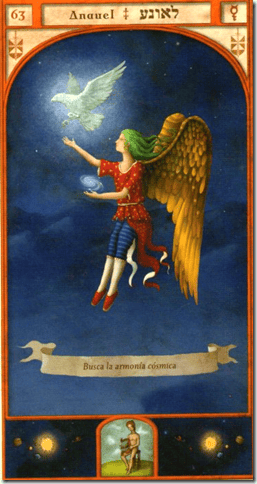 [sociallocker id="356″]Those born under his regency have a subtle, shrewd and inventive spirit. Their conscience will produce only true words and actions. He will be an excellent intermediary between heaven and earth. By his great enlightenment he will understand the mysteries of the relationship between all things. He is a great initiate and has already practiced magic for the good of humanity. He will be eager for knowledge, having an appreciation for study and reading. He manages to adapt easily to any environment situation, not worrying about safety. His critical, symbolic and orderly intelligence will cause him to have difficulty in finding his ideal companions. He will not worry about physical ailments as he lives by the maxim: "in a healthy body, a healthy mind". When ailments eventually appear he tends to heal himself. [/sociallocker]

Hod's wealth had grown considerably in recent years. Its inhabitants were skillful traders, and among them the most outstanding was Anauel, a rich banker who had managed to amass an enormous fortune.

He had prospered so much in his business that many aroused a vile envy that led them even to plan accidents where, with a little luck, he might lose his life.

But fortune was not only smiling on him in business. Anauel seemed to have a pact made with heaven, for in spite of how well planned the accidents were, they were of no use, the young banker did not even get to know about those murder attempts.

Everyone wondered what the secret was that made him so much money. The truth is that it was no mystery. Anauel was smart, very smart, and knew how to sell his stuff. He never lied, but he had a special art, a magical gift to convince the customer that his product was the best.

But not everything can be had in life, which for many, that wealth would have been enough reason to feel happy, for Anauel did not quite satisfy him.

I wanted to do something important, a big deal.

Destiny seemed to read his thoughts, and one day, a royal messenger came to the village with an urgent edict:

"His Majesty King Log, announces that from the next Sun, taxes will go up to cover the royal expenses. Anyone who fails to comply with this order will be forced to do so."

That note sparked a general outcry among the people of Hod. They did not know what the measure was about, but they were not willing to be subdued in this way.

The merchant's council met in order to find a solution. After many hours of talking and talking, it was Anauel who took the floor and said

- I'll be the one to go to the palace and find out what's going on. My reputation will assure me an audience with the king in which I will try to convince him of his mistake.

Everyone approved of that proposal, as they saw the opportunity to kill two birds with one stone. They thought they might never see him again and that meant taking down his strongest rival.

Anauel arrived at the palace and as he thought, his name opened the doors for him. He would be received by King Log.

- Your Majesty, in the rich people of Hod we do not understand why it is necessary to raise taxes so much," explained Anauel.

- The latest palace expenses have ruined my coffers. I have nothing, not even to be able to feed us," the king said, angrily.

- I received a request for money from the counties. They said they were going to guard the palace from the enemy hordes. I gladly agreed, but not only have they not defended me, but war has broken out between them.

- You must assert your authority and you must do so by uniting all the counties into one. You must all live on one ground and speak one language. You must all bear witness to the same king and defend his kingdom as one arm. That is the secret of wealth. May your message cure them of their evil, their ambition, their selfish desires that lead them to division and war. May your voice be lucid and sensible and not fall into the madness of lavishing your wealth to finance vain enterprises.

Let my gold serve to unite all the counties into one nation.

This is how that skillful merchant was able to carry out the greatest business of all time. His riches served to heal a people who were sick and who would no longer be sick from that day on.