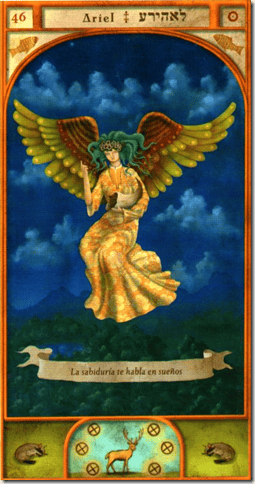 Attribute: God is my light.

He will have great ideas, sublime thoughts, strong and subtle spirit. He will be discreet, but capable of solving the most difficult problems, making his decisions at the right time. You will like to meditate and know ways to come to an understanding of mystical matters. He will make discoveries that will benefit the purification of the spirit through service to his fellow men. You will use technological means such as computers, radionics and transcommunication techniques to apply to your spiritual quest. He will occupy a prominent place in society, his motto of life is: talking is that people understand each other.

Never disrespect people with experience, all aspects of your life will be ready for success. His great intellect will make him astrally have a golden crown that represents the light of wisdom. It will represent the power and the conquest of harmony of man in his divine quest.

The Lord is good to all;
he feels sorry for all his creation.

Ariel: 'THE BEAUTY OF HARMONY

She had just come home from school and was feeling very exhausted. It was exam time and this required more effort to pass.

That night I barely had dinner. She was so tired that she decided to go to bed early.

He did. Saying goodbye to her parents, young Ariel sought the comforting rest that would make her sleep easier.

She would sleep for hours," she said to herself, "I had finished my exams and that thought reassured her.

He would hardly remember the next morning if it took him too long to fall asleep, but he did not do more than rest his head on the pillow when his spirit left his worn-out body to replenish its energy.

While this was happening, Ariel's spirit traveled quickly through the region of "Desires", where everything is possible with only the desire to do so.

Someone was waiting for her. He was an old man, although his advanced age did not prevent him from moving with wonderful agility. His clothes were of a very intense blue light and his voice was melodious and angelic.

-Follow me, Ariel, I will guide you to the place where you wish to go," said the old man.

–And how do you know what my wishes are? -I ask, missed the young lady.

-I know everything I need to know about you. But don't worry about that, and now come with me," answered the old man enigmatically.

The young Ariel obeyed him and saw how in the blink of an eye, they found themselves in a totally different place. But how wonderful it was.

Before his eyes he had what he had dreamed of so much, beauty.

-Choose now that you have the opportunity to do so," said the old man.

Young Ariel took on a face and a new body, and felt like the most beautiful woman in the universe. She turned to thank her benefactor, but he was gone.

He would be in a hurry," thought Ariel, "and he followed in his footsteps. Suddenly he was at home with his family. Her life was normal, but with the difference that she was the most beautiful of all the girls in the area. That made her happy, but her happiness soon changed, for all those who had been her friends until now turned their backs on her, for she was conceited and arrogant.

That disappointment tormented her, and so I strongly desire to go back to being as before, simple and humble.

-You can improve that too," said a voice behind his back.

It was the old man again, who was smiling sweetly at him.

-Easy, dear girl, to wish for it! -said the wise old man.

And so it was that young Ariel found herself following her benefactor again. This time a different landscape was shown to her. Before her were three chests. One contained power, one wealth and one harmony. The young woman took the last one and then, a strong commotion caused Ariel's spirit to quickly return to her rested body. She looked out the window and saw two children fighting. She called their names and instantly the two stopped fighting and embraced each other warmly.

The young Ariel had acquired a special beauty, more lasting than the physical one, that of the love that knows how to bring to others the eternal peace.