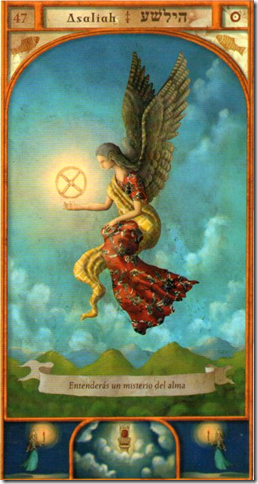 Attribute: God who shows the truth.

[sociallocker id="356″]He who is born under his regency will be sweet, tender and have a pleasant character and his charisma will stand out. He is just par excellence, incorruptible and of high faith. Truth will be a constant in his attitudes; he is extremely dynamic, living his day-to-day life, taking advantage of every second to realize every idea that comes up. He will go beyond his own strength, but without exhausting himself. He is elegant and firm and has great self-control. He will be subject to sacrifices in pursuit of his ideals. His aura of wisdom is verified as a sign on his forehead. He does not like confusions, mainly those of a sentimental nature. He is proud without being snobbish and accepts sincerely other people's doctrines. He will always be changing form without altering the divine essence. [/sociallocker]

O Lord, how awesome are your works,
and how deep your thoughts go!

When all the children were having fun playing with each other, we could rarely find Asaliah in the group participating in the game.

There was something that interested him much more than those children's entertainments, at least that was how he saw it who was not older than his peers.

At that time, the only thing the young man was worried about was catching some grasshoppers or even some mice to subject them to his scientific research.

Yes, you know what the extravagant Asaliah spends his free time on. His greatest wish was to know the reason why, and on that day he wondered why the grasshopper was green and jumped so easily.

With a very sharp knife he opened it in two parts and what was his joy when he found that those green particles he found inside must have been the reason why the grasshopper was green.

In truth, what speaks out was the food scraps that the poor insect had ingested moments before it was caught.

During the first years, Asaliah took a lot of interest in her studies and thanks to this she obtained very good results.

The time had come that I had always hoped for, the practice of anatomy. I had the opportunity to know what was inside the human body. I had always dreamed of that moment.

There I was, standing in front of a lifeless body. The teacher was explaining the organs one by one, and Asaliah, unable to control herself, was anticipating this one, and before he said the name he had already done so.

Asaliah was very impressed by all those experiences, but he would be even more so when he lived through the events that awaited him that night.

He had just left himself in the hands of the lady of the dream, when he suddenly found himself in the hospital where he was doing his studies. Next to him a strange character, with whom he seemed to have a mysterious relationship, was guiding him.

-Asaliah approached and observed," said her companion, pointing to some scenes.

Before the young man appeared a dying man. He was very sick and his heart had just stopped. Immediately, the doctor and nurses came and tried to revive him, but they could not. At that moment, from the body of the newly deceased emerged a cord of light, and little by little that light adopted outside the lifeless body, its very image.

Asaliah then realized that he was in the world of the dead, and before him was the spirit of the newly deceased.

-But how can this be? -I ask his companion, "I never thought that life would continue after death.

The spirit that had just left the body of the deceased felt a deep pain. Asaliah wanted to know why, and she found out they were doing an autopsy. That which he had so often done to grasshoppers and mice.

That spirit was deprived of the possibility of learning from the experiences he had lived. He was thus sentenced to live them again.

Asaliah returned to his body and felt exhausted. Those experiences had affected him so much.

That day at the hospital's anatomical institute, she was supposed to participate in an autopsy, but Asaliah would not. He wanted to convince the teachers of the mistake they were making, but they took him for a madman.

Since then, the intelligent young man has devoted himself to defending the rights of the deceased and with his work he has managed to stop these practices. Many spirits would be truly grateful to him.