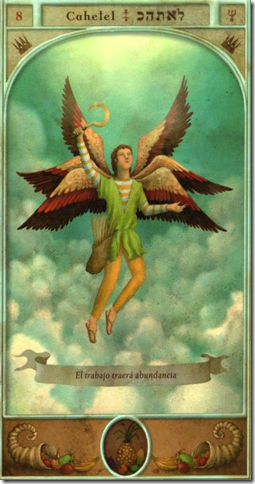 It helps against the luck, spells and spells of the enemies.

Lesson: Overcoming vanity and the servitude of abundance

Come, let us bow down reverently,
let's bend the knee
before the Lord our Maker.

They possess harmony in their character by balancing the spiritual with the material.

They are mature and master their impulses. They have a clear vision of the world and its laws and always go forward in what they set out to do.

Because of their maturity they sometimes feel uneasy about their social group, family and friends because they have difficulty understanding them.

They follow their heart and with great intuition show themselves humble in order to transmit their knowledge and wisdom.

They are not afraid of anything and are always willing to go on a trip, with their luggage ready.

He will be able to be a pioneer in agricultural production, he will know how to share his prosperity with those closest to him, although he can attribute his success to luck, he always thanks God for everything he achieves.

Cahetel: "The Defeat of Belial"

Evil's haunts were spread all over the land. It was like an imperceptible moon breeze that slowly contaminated everything in its path. Those who breathed in its nauseating stench were prisoners of its spell and were lost in the maze of passion.

Thus it was that the hosts of darkness, a terrible and powerful army, recruited new forces day by day. They were expert and skillful seducers, and their sinister songs drowned out the melodious compassion of sweet harmony.

So were things in those dismal days, and yet there was still a forgotten corner of the earth where the destroying hand of darkness had not reached.

- The world is ours, and the power we possess is immense. We will dominate the Elements and the Fire, the Water, the Air and the Earth, just as every living being will have to kneel at our feet.

He was the prince of the infernal legions, who in his unbridled desire to do evil had tempted man, and he had yielded to his seduction.

That victory made him proud, almost a God, but that celebration would not last long, for the words of his lieutenant would make his entrance bitter.

- Prince Belial, we have not yet mastered the whole earth," he said fearfully.

- There is a small and humble region in the Kehod region. It is fertile and prosperous, but its inhabitants should not worry us," answered your servant.

- You're wrong, there must be no soul left that does not serve my throne. Go and offer him my services. I soon await your answer," said Belial threateningly.

This is how the quiet villages of Kehob received the unexpected visit of the legions of shadows. Suddenly they deployed their power and sought to spread their darkness over the hearts of those innocent souls, but that attempt failed, for a strange and powerful aura protected them.

- It is not possible," whispered Belial's faithful servant, "our spells can do nothing against his will.

Failed, he returned to his headquarters in the depths of the abyss and told his boss and master what had happened.

The news triggered Belial's anger and rage, and his disappointment was such that the depths of the earth were broken with grief.

And those elementals came to life and served Prince Belial. However, in the region of Kehob an invocation was also raised. It was Cahetel who made it by imploring the goodness of God, the Supreme Creator.

The Salamanders provoked their fire, the Undines contaminated the waters and the Elves invaded the fields with insect plagues, but from the sky and at the voice of Cahetel, the pure waters of Hochmah fell putting an end to that failed attempt of destruction.

From that day the power of Belial diminished, and little by little, other villages imitated the pure souls of Kehob, and soon the evil withdrew.