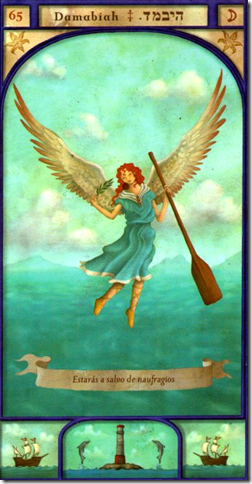 [sociallocker id="356″]He who is born under its influence will have considerable wealth and will stand out in the environment in which he lives for his useful discoveries. He may be called an adventurer for living life in a profound way. Generous, noble, and possessing a very high spirit, he will have an enormous possibility of success. With his positive thinking he will be able to break any kind of curse, he will have financial help in his search or expeditions that can be taken historical. He will always be changing cities without programming anything too much, letting things happen by surprise. You will always be involved in multiple emotional situations. He loves freedom and can't stand prison-like relationships, true to his ideals, he will never make anyone suffer for his selfishness or take advantage of a helpless person. [/sociallocker]

The Lord watches from heaven
and see all of humanity;

DAMABIAH: 'THE SOURCE OF WISDOM

That calm, that inactivity, was making him sick. He wasn't the man who knew how to stand idly by when there was so much world to know.

These were the thoughts that kept young Damabiah awake, even though he was well into the night.

Sitting on the deck of the ship in which he had lived such good adventures, our friend spoke aloud as if the stars - his only companions - were going to hear him.

The silhouette of the moon was clearly reflected in the calm waters of the sea. She was beautiful and imitated the greatness of her beloved Sun, wearing her most beautiful clothes. She was full and full of life.

He was engrossed, as if hypnotized by that light, and suddenly and without knowing how that strange event happened, that shining face came to life and said to him:

-Damabiah, Damabiah, you must set out for distant horizons in search of the Source of Wisdom.

The very surprised boy rubbed his eyes again and again, for he thought that he must be the victim of some sort of enchantment. But no matter how hard he tried, the smiling face of the Moon grew brighter and brighter.

- I can't believe my eyes," the young man shouted a bit frightenedly. Tell me, what are you, an illusion that will disappear when I open my eyes again?

- If you don't believe me, take your fishing rod and cast the hook where I am - I invite the Moon -.

Damabiah obeyed the instructions and cast the line hard, causing the hook to reach right where that reflection was. Soon she noticed that something had bitten and pulled with courage, for she feared it would escape. The hook had caught a small chest. How mysterious was all this?

He took the young man with a certain nervousness and opened the chest. Inside he found a very old piece of paper and a map drawn on it. It was the map that was to guide him to the island where he was to find the Fountain of Wisdom.

Now he believed, and when he went to thank the moon, his face was already reflected in the water, he had continued his journey into the sky.

The next day Damabiah recruited 40 men, strong and hard-working fishermen who, like him, had a special love for adventure. He promised them a valuable treasure if they made it to the island of Yeshoch.

With the rising tide, they set out to cover the six cardinal points. No obstacle will prevent them from achieving their goal.

And though his courage was evident, many of the crew would doubt him that evening.

A terrible storm broke out in a few minutes. The wind was a cyclone and threatened to send them to the bottom of the sea if it didn't blow away soon.

The sailors who were very superstitious murmured to each other that someone had made them without spells and had aroused the fury of the infernal spirits of the sea. That fear spread among the others and Damabiah had to intervene to prevent the panic from becoming collective.

- Take the fear out of your minds and let the blood boil in your veins. Come on, we have to overcome our weaknesses and the storm will go away.

And so it was, when those sailors managed to put order within themselves, the storm abated, and calm reigned again.

The next morning they spotted land. They had reached their destination. On the island of Yeshoch they found a true Fountain of Wisdom and many remained on that island forever. Others preferred to return loaded with treasures and wealth to buy new land with them.

In the end, both succeeded in finding happiness.