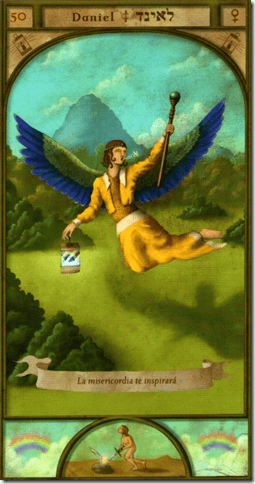 [sociallocker id="356″]People born under this influence will be hardworking and perform their activities with much love and will perceive that their intuition can reach genius. They will have protection against disease. He is determined and does not like anything that is not clear and well applied. Patient to the extreme, he will be able to endure almost anything from people, but will not accept being refined unfairly, and may be aggressive. He does not waste his efforts on impossible fantasies. Motivated and fair, he will be a public person with the ability to deal with any issue. He will discover the reason for many social problems and will convince society of his proposals. In childhood he may have had problems showing affection, so it will be common to see him very attached to his children. Some acts of his adolescence may mark his life giving him full certainty of God's help. [/sociallocker]

The Lord is good to all;
he feels sorry for all his creation.

DANIEL: 'THE ANGEL OF MERCY

Once again Vesar missed a wonderful opportunity to get over his shyness. If she had made up her mind, she would not now be saddened and reminding herself of the chances she had missed to see her dreams come true.

He didn't know what was wrong with him, but when he was faced with situations, he couldn't get a word in edgewise and most of the time he didn't even make up his mind to deal with them.

The feeling of frustration drowned out her joy and without realizing it she became a lonely young woman.

He began to feel envious of others. They were so easy to make decisions, it bothered him just thinking about it.

That sadness was drawn on young Vesar's face and her beauty was gradually transformed to such an extent that she became a horrible being.

All his friends began to pity him and that feeling only increased his pain even more.

He barely went out anymore. He fled from everyone and sought shelter in the shadow of his shyness.

One day, his anguish was great and his sorrow so bitter that he sought comfort in prayer.

I raise his face, hardened by tears, to the heavens, and fix his gaze on a strange cloud that has taken on the face of God, and I invoke his name with humility, saying

-Oh my God, help me. I feel lost and without the strength to continue fighting against my weakness! -pleaded the young woman.

No doubt she did not expect an answer, but she was comforted by opening her heart to the one being who would not laugh at her. But she was wrong, for behind her back a voice called her by name:

-Who are you, and how do you know my name? -I answer very surprised, the young lady.

-I am Daniel, the Angel of Mercy, and your name, Vesar, is inscribed in the Great Register of Heaven. I will help you, but I cannot do it if you do not confess your sin. You must know, little one, that the Eternal is merciful and compassionate, slow to anger and rich in goodness - the Angel sweetly explained.

Young Vesar felt exposed, naked before such a noble being. She had always hidden in the depths of her being the betrayal with which she had one day punished her best friend. She wanted to be famous, to be venerated by everyone, but her friend was going to stop her, because she was more beautiful than she was. It had to avoid it, and for it decided to betray it. However, despite his attempt, Vesar did not achieve his purpose and instead lost his best friend.

Since then, she had not forgiven herself and that feeling of hate prevented her from making important decisions in life, because the memory of the betrayal tormented her.

Daniel, who had the power of the sacred vision, was reading his thoughts and saw that Vesar had learned his lesson, and said to him:

-You can go in peace, little Vesar, for I have breathed into you the power to rejuvenate beings and things with your breath. And although Vesar did not understand very well what that meant, he soon understood it, for his behavior changed completely. Now he made decisions and every time he did it revealed to others their potential sleep and illusion was reborn again in them.