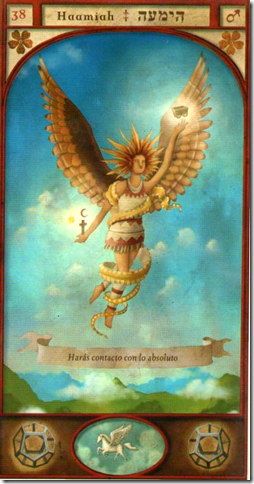 Attribute: God hope of all.

[sociallocker id="356″]He who is born under his regency will serve God through his great intelligence and conscience acquired through study, mainly as a self-taught person. His wisdom will be used by God for the unification of religions, forming a universalistic religion. He will solve the problems of all people using his prodigious intuition. He will defend individual liberties and fight with preconceptions. He will have great facility in accepting many things that for others are surprising or incomprehensible. He will be attracted to eccentric people but will detest possessiveness. He does not like anything rash or to change prearranged plans. He will fight with people who cultivate the lower mafia and will defend the divine with the most powerful of weapons: the truth. His mission on earth is to elevate the human being. [/sociallocker]

Since you have put the Lord in charge of your refuge,
to the Most High for your protection,

HAAMIAH: "THE FIRE OF ETERNAL TRUTH

Marve's kingdom had fallen from grace. Its king could no longer rule wisely, for the Sacred Key guarded by the Twelve Elders had mysteriously disappeared, leaving all those who dwelt in and depended upon that Power helpless.

Since that unfortunate day, the Light that guided them spread in such a way that they became prisoners of darkness, and that could only mean one thing, perversion.

Protected by the power of darkness, the creatures of the shadows emerged from the infernal abysses and wanted to govern that wretched kingdom.

The battle was fierce but uneven, as the soldiers of darkness formed legions and were skilled warriors who were experts in killing.

King Blumir felt powerless in such a situation. His men, though brave, were at a disadvantage against that army of killers. He did not know what to do, his advisors could not find the Key to Power, but there was still a solution. It was virtually impossible to achieve, but they had to try, and for this purpose they met with the king.

-King Blumir we must act -one of the elders said. There is a possibility of putting an end to the invasion of the Shadows, but know that the enterprise is dangerous, very dangerous.

-No matter how serious the danger. Choose the bravest man and instruct him in his task," said the king.

-Know, Your Majesty, that he is not to be the bravest man, but the purest," said the old man, "and that man is your son.

King Blumir's face was transfigured, but he knew not to be carried away by feelings and nodded to the request.

King Blumir's son, Prince Virtue, was informed in full detail of the dangers of the mission.

He had to find the Fire of the Eternal Truth, and to do so he had to meet the Oracle Haamiah. If he succeeded in answering his riddles, he would have achieved his purpose, but if he did not, he would have to pay a price with his life.

After three days of walking, Virtue arrived at the temple where he would meet Haamiah.

-Come in, boy, I've been waiting for you- -I invite a voice from the inside. You mustn't waste any more time, because your people are dying in the hands of the Shadows.

The young Virtue had barely escaped his astonishment, when he was already asking him the first and only question.

-Through me the mysteries are revealed to the intelligence and men can contemplate the Magic of Creation. To discover my secrets, where must you turn your face, to the North, to the South, to the East or to the West?

Virtue was thoughtful. I carefully reflect and search within for an answer, and after that meditation I answer:

-To the East, wise Oracle. The Light of Life is born every day from that point and in the whole it has its beginning and not its end, it is the Eternal transmutation.

-Wisdom speaks through your mouth, boy. Receive the Fire of the Eternal Truth and go quickly to your kingdom, for before this Power nothing can be evil.

Thus it was that the kingdom of Marve defeated the darkness, and from then on, all the days of its life would be directed towards the East, where every morning the Sun would rise raising the Castle of Truth.