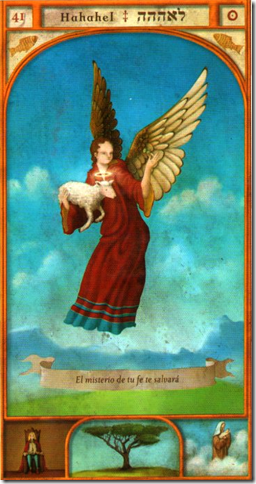 [sociallocker id="356″]He who is born under his regency loves the truth and is obedient to his duties and obligations. Strong power of concentration and wisdom to discern and judge. He faces problems naturally and in his existence he feels that God has a great mission in store for him, but he never knows when it will begin. Probably his mission begins when he finds the ideal partner, for the fulfillment of this mission must be accompanied by the person he loves. He will be willing to have children so that they will continue with the teachings of truth. The Angel of Regency also grants her the gift of communication, charisma and the facility to learn about the most diverse matters, mainly in the esoteric area. He will probably start working very early, having a tendency to work linked to spirituality. He will seek the truth in the teachings of the great masters by deepening his study of the apocryphal books (those not channeled for the Bible), and will always be at the service of God. He will always seek harmony and teach people to live together in a new religion, one that transcends the temple and comes from the heart. He will have many friends and followers of his ideas and may have views that conflict with other religions. He will be a specialist in religious dialects and an expert in deciphering sacred data. A great transformer of the world, he will live a splendid life and be happy. [/sociallocker]

Lord, deliver me from the lying lips
and of the lying tongues.

The bells of the high tower of the church rang out sadly on that cold winter morning.

On this occasion, they had the unpleasant mission of announcing the loss of a loved one, but also with that compassionate ringing, he knocked at the gates of heaven where he would be received with joy and rejoicing.

Hahamiah, had been for 40 years the High Priest of the kingdom of Hoch and there was not a single inhabitant in it, who did not love him. His goodness, his humanity, his wisdom had won the hearts of all of them, and now they could not help but feel selfishly about his departure.

The King of Hoch was deeply moved. Habamiah had been like a second father, and all his life he had never known a wiser being. His spiritual guidance and advice had allowed him to reign during all those years in the most splendid peace.

- Who would replace Habamiah? -asked the king in those difficult moments.

Many were the apprentices that the wise man had in his charge, but until now none of them had proved their effectiveness as a priest.

The Monarch feared that he would not find a suitable replacement, and so he convened the Great Council and expressed his concern to it.

-My friends, the kingdom has been left without a spiritual guide and as you well know we cannot rule if one of the two columns of the Temple is missing. I have gathered you together to advise him as to which way I should go. Who will take his place? -warned the king.

-We share your concern, Your Majesty," said one of the elders, "and we thought that among the apprentices there must be one who can replace the wise Habamiah.

-You must, you must... -Claim the angry king. I don't want assumptions, I want facts.

-Let us put them to the test," said another of the elders, "let us ask them to devise a ritual that is worthy of burying Master Habamiah. The one who does it best will take his place.

This was communicated to the four candidates and they set to work. After two days the work was completed, and they presented it to the council of elders preceded by the king.

The first of the aspirants was concerned with praising their greatness. He glorified his name by likening it to God.

The second made a poetic chant that sweetly exalted the purity of the Master.

The third, he wrote a long speech in which he narrated the life of the sage.

The room, on the other hand, had written absolutely nothing, but when asked, he said:

-Our heart is sad because we have said goodbye to a friend, to a Master. But let us not forget that he is also a man, and the human soul does not belong to this world. His homeland is beyond these confines, where the harmony of the spheres created by God reigns. Therefore let us lift up our hearts and ask the Creator to guide his steps on the path of Light, so that he may soon merge with it.

That aspirant was Hahahel, and with his words he won everyone's trust.

From that day on, Hahahel would be the new spiritual guide, and he would do it too, who would not miss Habamiah's absence.