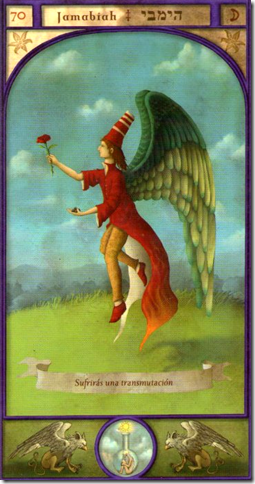 Attribute: God creator of all things.

[sociallocker id="356″]Whoever is born under its influence can master all the phenomena of nature (the powers, the energy). He will always have ideas of confidence and optimism in all areas of his sentimental, social and professional life. He is a bit reserved and sometimes introspective. He perceives everything around him and when it is necessary to take action immediately. His image is one of integrity and he never has anything to hide. He is spiritualised, detached from everything that is not essential. He manages to regenerate people, plants or animals. He seeks much of his own truth and is a true liberal and can be a connoisseur of cosmic organizations such as the great White Brotherhood and higher aspects of Angelology. He has great intuition and receives great information through this. His religion is the truth and he is master of his destiny. [/sociallocker]

And God said, "Let there be light!"
And the light came into existence.
Genesis 1:3

The story that I am going to tell you is the story of a true gold prospector who, after many years of searching, one day found what he wanted, a wonderful vein, but we do not know if this discovery brought him happiness or if it would bring him misfortune. Let's see it.

It had been twelve years, twelve heavy and long years of untiring work, of going back and forth without knowing what a well-deserved rest was, sleeping most of the time with the firmament as a roof and eating only what he was able to find in his path.

But in the end it was worthwhile to pass all those calamities, because the finding of that vein had made him a rich man, very rich.

The crazy and ragged seeker who one day left to flee the troubles of poverty, returned as a wealthy and respected gentleman.

No one speaks to him in recognition and many of those who had once despised him now flocked around him trying to gain his sympathy and trust, so that he would be attracted by that false friendship and share his wealth with them.

That hypocritical situation amused him, and Jabamiab let them entertain him for a while, taking advantage of his advantage, until the day came when he gave them a good lesson.

Everything seemed to be smiling at him since he was lucky enough to become a rich man. He felt like a lord and master of that village. He had so much power in his money that he could buy anything he wanted, even the morale of the people.

Little by little he took over everything and to make sure that he never lacked money he built gambling halls where every day he stole from all those who played in them, without them knowing it.

Since he arrived, Luven had become a corrupt city, and all those who came to it were seduced by its charms, and when they left, many tried to kill themselves, as they had nothing left to live for.

One day, Jabamiah suffered a terrible accident and had the misfortune to become disabled. Not all the gold in the world could restore the feeling in his legs, which had been paralyzed.

Overnight, the happiest man on earth had become the most miserable. He didn't want to talk to anyone, he just wanted to be alone. He found that he had always been, even though he was apparently surrounded by many people. Everyone had sought him out for his wealth, no one ever needed him as a person.

Those thoughts were occupying his lens and hammering him hard. So many years lost for the sole purpose of making wealth, for what?. Life," he thought, "was more than just possessing and being possessed. When had he given the? He could not find an answer.

Jabamiah was feeling more and more disconsolate. He no longer cared about being an invalid man, he cared very much about being a corrupt man and he told himself he had to do something about it.

And so he did. The first thing was to build a temple where Luven's souls could find the peace he now felt. Later he would build schools, gardens and houses for those who needed them.

Jabamiah felt, as now his life was fuller. He could not walk, but his actions did for him. Although not for long, since his nature changed so much that his sick organs regained their health, and that gold prospector found a new vein, but it was spiritual gold, the eternal power of the spirit, this time.

* Definition of Phylon: Mineral filler in the earth's crust.