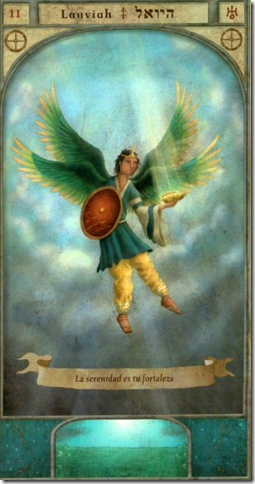 Chorus: Cherubs, Angels in the service of Hochmah-Amor.Angel

Lesson: Be wise and overcome pride and jealousy.

He is the God who vindicates me,
the one who lays the towns at my feet.

Evolved aspect: he has the ability to understand symbolic messages and revelations. The astral world manifests itself through the unconscious, with visions, premonitions or images of the higher worlds occurring to them. Their psychic faculties are manifested through small details, such as music, poetry, literature or in philosophy. Through the nobility of character their spirit radiates a very intense light within. He knows that his analogical part is capable of getting everything he wants, mainly when the request is made by someone else. What he dreams of achieving becomes reality. You can be the pillar of your family or a great support where you work. Your material things will be achieved through a lot of struggle, even sometimes with suffering. You will have a pleasant and cordial, comforting reaction to the people closest to you. He will understand the sadness, because he knows the inner mechanisms of the human being. He will enjoy Kabbalah and philosophy. He will be a cultured person.

A great commotion attracted the attention of the villagers, who rushed to the scene of the incident, where they could witness the heated conversation between the two young men.

Very close by and called out of curiosity in the face of so much hullabaloo, a guard in charge of maintaining order approached the square where many citizens were already gathered.

Make way... come on, make way," shouted the guardian, as he tried to make his way through the thick crowd.

When he reached his goal, he witnessed those young people fighting over a frightened little sheep.

Okay, that's enough. You want to tell me what all the fuss is about? -I ask the guardian in a bad mood.

The guilty one is him," they both shouted, blaming each other.

Since you do not agree, you will have to appear before the wise Lauviah," exclaimed the guardian before that bewilderment.

Once in the presence of the wise Lauviah, it was he who said in a soft voice, addressing one of the troublemakers.

What do you have to say for yourself?.

Mr. Lauviah, the guilty one is the one who intends to steal the sheep I've been raising for months.

And you, what do you have to say for yourself? -I ask the other party involved.

Mr. Lauviah, it is not true what this thief says, the sheep belongs to me - I answer with anger.

Well, in view of the fact that we can hardly know which of us is telling the truth, sacrifice the animal and divide half for each.

The second of the rioters, upon hearing the sentence, said cheerfully:

You're really wise, Mr. Lauviah, it's a good idea.

Instead, the other young man will find himself sad and grieving, and it was this gesture of compassion that made Lauviah rectify the sentence, and he said

Give the sheep to its true owner so that joy may return to his heart, for truly his love for the animal has touched my breast.

This is how Love managed to become the revealer of truth once again.