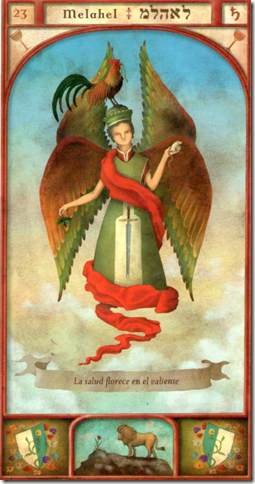 Attribute: God who delivers from evil

The Lord will take care of you at home and on the road,
from now on and forever.

[sociallocker id="356″]That's absolutely right, he likes to see everything in order. He never neglects his duty. He has mastery over communication. He expresses his feelings clearly, although he can sometimes be shy and introverted at first contact. Has strong premonitions. He is attracted by spiritual philosophy. He can be enlightened. He will be bold, capable of undertaking dangerous expeditions and exotic work. He will be an active ecologist, an expert in healing plants. He will have an extraordinary intuition to know people's problems and their most intimate secrets. Helping them to solve them with the secrets of plants. He believes that God is truly present in nature. [/sociallocker]

Angel's parents were already on the verge of despair. The disease their only son was suffering from was consuming them mentally.

They had consulted the best doctors in town and yet their son was not getting any better. They no longer knew what to do, or where to go. The little hope they had left was dying.

His mother, a woman of deep faith, did not stop praying to God for her son's health. She saw that life was slipping away from her and her helplessness in not being able to avoid it made her suffer deeply.

One morning, a traveller arrived unexpectedly in the village and his clothes attracted a lot of attention. His only baggage was a bundle, but its contents must have been of great value to the newcomer, as he guarded it carefully.

Very close to the square, where the villagers used to meet. The traveller could hear a conversation that caused him a strange sensation.

Those two women were commenting on the sadness of Doña Marta, Angel's mother. She knew that her son had been ill for months and that his illness was a mystery to the doctors, who had not been able to cure him, and were very much afraid that he would die.

As soon as he learned those details, he couldn't help but intrude on the conversation.

-Ladies, forgive me. I have inadvertently heard what they were saying about a sick child, and I would like to pay him a visit. Could you tell me where he lives?

Both ladies were surprised and looking at him from head to toe, they felt mistrust, however. When their throws crossed, those clear eyes dispelled all doubt.

-Yes, my good man, he lives at the end of this street.

And without delay, that stranger was already on his way to fulfilling his goal.

He knocked on the door several times and was greeted by a sad-looking lady.

- Are you the mother of the sick child? -asked the mysterious traveler.

-You must not be alarmed. I am Melahel, a humble traveller who is just passing through and who wants to help you, if I may say so.

-And how can he do that? Are you a doctor? -I ask without much confidence the mother.

-A voice inside me has guided my steps to this town. He told me to take these medicinal herbs because they would serve to restore someone's health, and I think that person is his son.

Those words had a miraculous gift, for it had given him back a spark of hope, and it would not be only that, for those herbs healed his son definitively. The joy would be complete.

From that day on, everyone would remember the strange traveler from whom they learned the healing properties of plants and their wonderful effects.