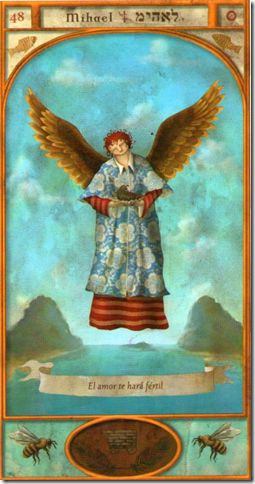 Attribute: God the father who helps.

[sociallocker id="356″]Whoever does under this regency is: peaceful, loving, will deeply love everyone and will take care of the preservation of the good of the community. He will be a great organizer of social and political agreements, promoting reconciliation and intermediary in negotiations. He will intellectually defend the rights of women in society and collaborate with community ideas of health, especially the well-being of children. He will study matrimonial relations through philosophy, religion, sociology or psychology. It will consolidate with words of confidence and optimism the relationships of friends and relatives. Your family will be project partners and you will be able to have a family with many children. Paternal, he is demanding in matters of study, but at the same time he is accessible, frank, strong and his earthly mission is humanitarianism. [/sociallocker]

MICHAEL: 'THE MESSENGER OF PEACE

The Secret Legend of the Times tells us that many, many years ago there was a king named Tiphereth. He was just and pious, and loved his people so much that before abandoning the material world and leaving for the celestial region, he asked the Great Arcanum to convert him into a Sun, since in this manner he could continue guiding them and protecting them from the forces of darkness.

The Great Arcanum, knowing the work carried out by the King, wanted to please him in his request, and from the day his spirit decided to return to his true home, he ceased to be a man and became a Sun.

From that moment on, the darkness no longer existed. Tiphereth felt happy to be able to light the way for all those who started the march, and to be able to vitalize the land called to give crops.

So much happiness was felt by all, that many left their jobs to enjoy the sunlight.

Time passed and soon food became scarce, as no one worked the land, only enjoyed the pleasures it provided.

That situation was getting worse every day and the wise men of the kingdom understood that they had to do something to avoid it.

For this purpose the twelve counselors met and after much discussion came to the conclusion that they should not keep the light permanently, at least until their people were prepared for it. And so they would tell Tiphereth.

-Magno Tiphereth, we are grateful for your constant willingness to guide us, but the people have become submissive, they are like puppets and have stopped creating. Life is stagnating. That is why we ask you to help us find a solution," said the messenger of the wise.

-I've seen what you're saying and you're right. Besides, I'm very lonely and I feel the need to know other lands. However, if I leave, you will again be plunged into darkness," said a saddened Tiphereth. But suddenly his face lights up.

-I already have the answer! -I exclaim enthusiastically. I will get married. That's it. You must find a princess of noble stock and bring her to me.

And following Tiphereth's instructions, the wise men sought out the princess who was to join the king. In order that she might accept such a purpose, Sol offered the princess the power of the night and she accepted.

The wedding was held without delay and the great Princes of the Cosmos were present. There was Hochmah, the Great Sage; Binah, the Instructor; Hesed, the Mighty; Gueburah, the Just; the beautiful Netzah and the intelligent Hod.

The banquet was select and for many eons of time it would be talked about.

Tiphereth and Yesod, King Sun and Queen Moon lived happily the first few years, but the queen began to tire of her husband being always venerated and entertained and she always criticized and despised. For that reason, she demanded that her husband should give her some of his light. Tiphereth refused, she was not willing to do so, that would be humiliating.

But his refusal made the situation worse and Yesod indignantly abandoned him.

The kingdom was in chaos again, but Tiphereth didn't care.

Seeing the Great Arcanum that Tiphereth's pride was endangering one of her most beloved kingdoms, she ordered Michael, the messenger of peace and harmony, to give the Sun one of the rings of Binah to wear always.

So did Mihael, and when Tiphereth put the ring on, some of his light was incorporated into Yesod's dark body.

From that day on, the queen would visit her husband's dwelling once every 28 days, and on that day she would melt into his arms where she would be invested with robes of light, which she would wear with special beauty for the remaining 27 days.