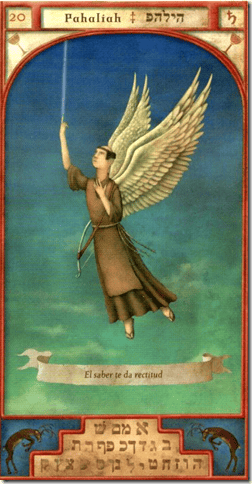 Lesson: Control of emotions and desires

[sociallocker id="356″]He develops a strong personality from a young age. He's a true righteous man fighting for great ideals. He is a great optimist, a master in the art of discernment and likes to live in peace with everyone. He traces for this life experiences that he already had in another one, mainly those linked to family and children. He does not know how to live alone, he needs a faithful companion to be happy. He generally appears to be younger than he is and also appears to have a lot of money, even though many times he has almost nothing. His Angel influences him in an energetic way, when he settles down to some situation. Working in communion with angels will help him materially. He will study the initiatic Kabbalah and will understand that the invisible world can make the visible world harmonious. He will be an intellectual student of various subjects in all areas. [/sociallocker]

Everyone at school was afraid of him, and if he had friends it was because no one dared to cross him. What he said had to be done, and if someone didn't agree, he had to be prepared to deal with it.

You will understand that Pahaliah "the feared", as many called him, did not really have a friend, because they were forced to be, if they did not want to be victims of his anger.

Whenever he wanted something, he took it, no matter who owned it. And if someone thought of betraying him, he would receive a harsh punishment.

Pahaliah seemed to fear nothing and no one, her indifference to danger was amazing and she enjoyed making others suffer.

Life hadn't treated him very well. The aggressiveness he had fed on during his childhood was now being transmitted to him, because it made him feel important.

But the pitcher goes to the fountain so much until it breaks, and one fine day everyone started to miss him. All week long he hadn't been at school and no one had seen him around the neighborhood.

Pahaliah was ill, seriously ill. A mysterious evil took hold of him, and although the doctors studied his case, they were unable to diagnose his illness and it was consuming him more and more.

The dreaded Pahaliah now lay weak and frail, barely able to keep his eyes open. Although he did not deserve it, his companions did not miss a single day helping his parents to take care of him.

Every day that passed, my hopes were reduced, I hardly ate anymore and my breathing became more and more difficult.

Pahaliah was on the threshold of physical death, and it would be at this doorway to the beyond, where he received an unexpected visit.

Pahaliah saw on his right a luminous being that was familiar to him, he still opened his eyes and got a big surprise. He was himself but wrapped in light.

- Who are you? How can you possibly be the same as me? -asked the surprised young man.

- I am your profound self that has remained a prisoner for a long time within you without you ever hearing my voice. Now that you are about to leave the physical world, I have come to reveal to you your errors. You had the opportunity to be an exemplary boy, and you decided on the contrary to be a calamity; your illness has been caused by your bad deeds.

For the first time in his life, Pahaliah felt fear, understood that he had made an attempt against others and the package of his mistakes was to suffer that evil disease. It was the evil he had sown.

- Give me another chance, let me rectify my mistakes, let me be able to change," prayed the young Pahaliah in faith.

But he was no longer on the threshold of the afterlife, he was back at home, and the evil that afflicted him was gone.