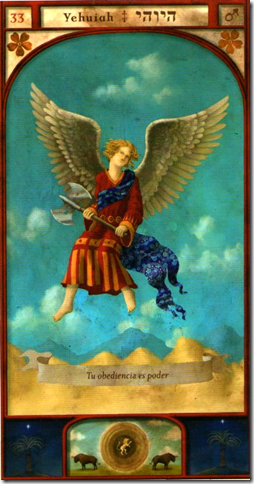 Attribute: God who knows all things

[sociallocker id="356″]It will be considered an archetype of God's works. He will be used by the Angelic world and his struggle will always be to defend the good. Understanding, sympathetic and loving, he will always be well connected and will be recognized by all. He will know how to control his inner world by adapting to reality and not allowing illusions to overtake him. He will fight to develop his spiritual tendencies which are of the highest degree of elevation. He will be beneficial to his fellow men by enlightening them with his good deeds. He will fight so that people will not be ignorant, contributing with classrooms or financial resources to this good cause. He will be a good friend and should be very careful in choosing a partner because he needs a quiet home in order to have a balanced personality.

The Lord knows human thoughts,
and you know they're absurd.

YEHUIAH: 'THE COURAGE OF A WARRIOR

The palace trumpets sounded again and again announcing the arrival of the great warrior.

His heroic deeds and triumph in battle had created a legend of the one who preceded him before the euphoria of the people, who acclaimed his courage and glory.

Yehuiah was worshipped by all. Kings respected him and the Gods gave him their power and grace.

Many thought that he was a chosen one and that he had been endowed with the divine gift of immortality.

On that day of honour, Yehuiah would be appointed Prince of all armies and Supreme Guardian of the Order. With those decorations the limits of bravery and courage were filled.

With his last battles, Yehuiah had managed to eliminate all the enemies of the kingdom, bringing peace to his king. And so, for years to come, the whole region lived very happy days.

With peace, prosperity and abundance were reborn. Health and well-being were breathed and everyone lived together in fullness.

That tranquility that at first meant a joyful experience began to turn into a monotonous situation that made those who were used to war very nervous.

It was for this reason that behind Yehuiah's back a malicious action was being forged that would try by all means to finish him off. That betrayal was directed by his lieutenant, his trusted man, who saw his admired chief become weak and soft.

With his cunning he managed to gather 6 men to whom he promised great riches and honors if they helped him to end Yehuiah's life. The lack of scruples and the desire for power, made those men support the machinations of the traitor and help him to fulfill his plan.

They took advantage of the darkness of the night to blend into the shadows and reach Yehuiah's private quarters unseen.

He slept at that hour and could not suspect the danger that lay ahead.

The traitors had no difficulty evading the guard and were already on their way to the place where the brave warrior rested his body.

In the meantime, when the dagger of that evildoer was going to his heart, Yehuiah who was in the world of dreams felt a voice warning him:

-Wake up Yehuiah, your life is in danger.

Suddenly and catching the assassins who were trying to kill him by surprise, Jehuiab jumped out of the bed and pushed his sword. There was no need for combat as fear put wings at the feet of the traitors.

To the next Marian Yehuiah I reveal the mystery and accuse his lieutenant of being a traitor. He could have sentenced his action to death, but he preferred to respect peace and let him leave the city, where he could never return.