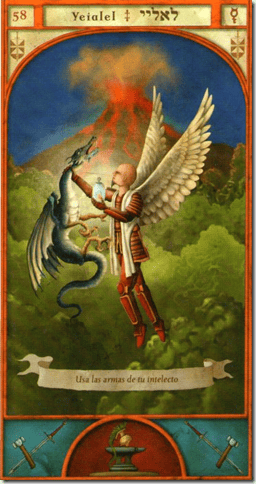 Attribute: God who listens to requests.

[sociallocker id="356″]People born under his regency are distinguished by their courage and openness. They will have the direct protection of the planet Venus and positive attributes of the corresponding signs: Taurus and Libra. They will be considered a lucid person who decides with clarity of expression all complicated and compromising situations. Frank and with a loving temperament he will have a great taste for flowers and paintings. He is optimistic and loves the truth and defends it so that everything is done in perfect order. He is gifted with great affectivity, strong aesthetic sense, solidity and appreciation of material goods. He accepts well his sensuality acting with serenity and tends to satisfy his tendency for all kinds of pleasures without repressing himself. He is a little introverted but always controls his exhibitionist instincts. He is risky but does not stray too far from the traditional. He has a combative spirit and finds in marriage the solution to his problems. Your partner will want to complement you so that you feel strong in the struggles you must undertake. [/sociallocker]

My soul is distraught;
How long, Lord, how long?

YEIALEL: 'THE VALLEY OF THE SUICIDES

If sadness could be measured, no scale could carry so much weight, at least that was how it looked to the unfortunate young man who had just jumped into the void of a deep abyss with the sole intention of ending all his sorrows.

But sometimes, even if we want to circumvent our destiny, it makes it difficult for us, and that is precisely what happened to Yeialel.

The disturbed young man in his eagerness to soon end his life did not notice the branches growing on the edges of that sinister gorge, and in the fall his body was slowed down by them, preventing him from crashing to the ground.

However, the blow was not hard enough to cause him to lose consciousness. It would be then, when

the reckless Yeialel would have an unforgettable experience that would change his life forever.

His senseless body was protected by the foliage of a thick vegetation, but his spirit was no longer inside.

- How strange was all that? -thought Yeialel, who looked with admiration at the place where he was.

Suddenly everything lit up and a deep voice announced:

- Attention all present, the case of the Supreme Justice against Yeialel is presided over by the honorable Judge Mersat.

- Oh God, what was going on? I must be dead and this is the Last Judgment," said Yeialel to himself, frightened.

- Let the accused stand up," said Judge Mersat, "I imperatively command a new voice. You must answer without hesitation, and do not try to lie, for I have in my possession a very complete report of your life which has been kindly entrusted to me by the Archivists.

Without the young man daring to open his mouth, the Judge continued with his presentation.

- Answer, why have you dared to end your physical life, don't you know that this is an attack on the principle of creation? -I ask the judge.

- It was the only solution to my problems," the young man complained.

- Coward! You're a coward. Look closely at this screen and you'll see what's good.

Before his perplexed gaze, a valley appeared where the thickest darkness reigned, from which came the moans and groans of souls afflicted by pain.

-They are souls who like you sought to solve their problems by putting an end to their lives, but their destiny does not demand that they return to their spiritual homeland and now they wander around waiting for that day to come, feeling the same pain and even more than when they were alive.

- It's horrible," said Yeialel, covering his face so as not to see those scenes.

- Well, I see you've learned your lesson. You were lucky, because your body didn't crash into the abyss. Woe betide you if you try again, then you won't be so lucky and you'll find yourself part of that wretched lot.

Yeialel regained consciousness in shock. Would it have been a nightmare? But he had the evidence that there was some truth in it.

He still seemed to be hearing those moans. With effort and intense desire to experience life Yeialel managed to get out of there. No matter how serious the problem was, it would not afflict him again. He would find logical solutions to the problems, and sadness would no longer be a burden to him. He had opened his eyes and from now on, his thoughts would fly higher, transcending material realities.