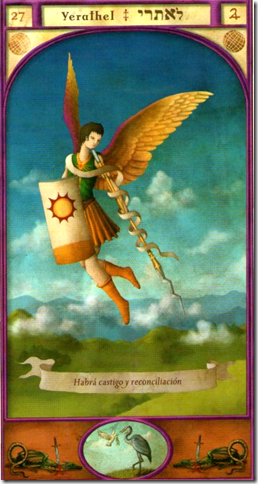 Attribute: God who punishes the bad.

[sociallocker id="356″]Evolved aspect: it's intelligent, balanced and mature. He manages to balance his individual instincts, accepting, without necessarily following the advice and demonstrations of affection of all. He has strong initiative and perseverance. His life is clear and full of joy. He has a noble and refined appearance. He will have protection against any kind of negative force and his power of action will be invincible. He will do everything in a lucid and thoughtful way and that is why his initiatives are successful. He will have an enormous capacity to know the future through oracles, dreams or projections, constantly revalidating his attitudes. He will be an advocate of science and the arts and will be able to mobilize a large number of people for an ideal. [/sociallocker]

of those who plot in their hearts evil plans
and every day they encourage war.

Malon was by no means what we might call a good boy, but on the contrary, his evil was so great that fame preceded him wherever he went.

He was well known and feared in all the neighborhoods and no one wanted him as a classmate.

That contempt caused the evil Malon to become even more angry than he was currently, and to reveal himself by violent acts, destroying everything in his path.

On a couple of occasions, the police had to intervene, and on one occasion they arrested him, but they just scared him and soon released him.

But Malon would not flinch from police threats and continued to spread terror wherever he went.

One morning it occurred to him to pay a visit to the school, surprising all those who passed him by.

His appearance was disastrous. He gave the impression that he had slept in the clothes he was wearing. Her hair was dishevelled and her face showed that she had not been in contact with water for days, perhaps months.

Everyone was moving away from him when he approached, but he didn't seem to care much about that on that day.

Following his instinct he went inside in one of the classes and once inside he sat down at a desk. Suddenly, as if it were an infectious plague, everyone left his side, remaining totally alone and isolated. But in an unexpected way and surprising even Malon himself, a boy approached him and with a kind smile on his lips, he said:

-Can I sit with you?

That request made the despised and feared Malon stutter, and even under the effects of his surprise, he answered:

-Well, I think we'll be good friends, my name is Yerathel," said his new partner boldly.

-What makes you think I want to be your friend? -I ask with serenity, Malon.

-I have nothing against you. I do not consider you my enemy, nor do I think you will ever be, since even if you slander me, deceive me, even punish me, I will not consider it an offense. I will think that perhaps I have deserved it.

Those words managed to make the sleeping heart of that unfortunate boy beat again, who until now had felt rejected and despised by everyone.

That mysterious boy with his sincerity had gained her trust and made her feel alive again.

Since that day, Malon and his friend Yerathel lived very close and taught others that love must be offered to all beings even if sometimes they appear with the face of the enemy.