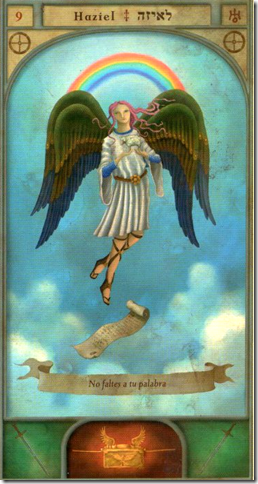 Remember, Lord, your tenderness and great love,
that you've always shown me;

They possess the grace and mercy of God because they know how to understand and not judge the errors of others. They understand that painful experiences occur so that we can be driven every day to our evolution. They enjoy the protection of the elderly and influential people, because of their brilliant performance in important jobs.

In the most difficult moments they will count on Divine Providence. They will feel favored in matters related to justice.

A loyal companion and a great friend, he has a noble character. They grow continuously and know that despite the obstacles they will always obtain a deserved triumph in any situation. Always forgive even the most serious offenses knowing how to transmute the negative into positive. You will appreciate Art and money will not be a problem in your life. You will not measure efforts in pursuit of your ideals.

Haziel: "The boy who wanted to be a giant"

Have you ever heard of Uran, the child who just by being a giant and the Gods granted him to be one? Well, consider yourself lucky since I am in a position to tell you about it, I was a witness to it...

Everything began that morning when Uran, a young man who barely raised two palms from the ground, arrived at his house crying and very indignant. His mother, who was not expecting him yet, was frightened when she saw him, since it was not normal for him to return from school so soon.

What's wrong with you, son? -I ask her, worried to see her silence.

I hate him," I answer angrily. Yes, I hate them, I hate all my classmates and I don't want to go to school anymore.

No doubt, Uran was quite angry. His great regret was that he was not old enough to face them. That's how he began to dream day after day about wanting to be a giant.

When his birthday came his parents asked him what he wanted for a present, but he answered that all he wanted was to be a giant.

As Christmas approached, Uran asked the Magi to allow him to be a giant. As you can see, our friend was truly convinced that he wanted to be greater than the others so that no one would ever laugh at him again.

It was one night in his sleep when the miracle happened - at least it would seem that way to him. His spirit was in a hurry to leave his body that day; it seemed that he was going to be late for an appointment, and so it was, for suddenly a voice said to him:

- You're late as usual. You'll have to get your material body used to going to bed early. Come on, follow me, we have little time.

Uran had not yet emerged from his amazement, for he felt as if he were floating on a cloud, and the greatest surprise came when he looked down and saw his own body asleep in bed.

- No, don't worry, you're not dead, you're in Desire World. Here you can make any dream come true, and I think you've had one for a long time, right? -said the mysterious being.

- Yes, I would like to be a giant," the young man enthusiastically replied.

- For Thy will be done," said the shining spirit that spoke to him.

Suddenly Uran saw how it grew and grew. It was incredible, what a beautiful feeling.

- You must decide for yourself how far you want to grow," that voice advised him again.

I look at their feet and they're barely visible. He was very satisfied, and decided to look for his companions, he wanted to give them a lesson they would not forget. On his way he came across a mysterious dwarf and wanted to have some fun with him.

- How are you doing, shorty?

- My name is Haziel, my friend," I answer sweetly.

While mocking him, he kicked him and rolled him on the ground. She stared at him, waiting to see his angry face, but she would be pleasantly surprised.

- I'm sorry, sir, I'm so clumsy that I've crossed your path. Forgive me if I hurt you," said Haziel humbly.

- But how can you be so stupid? I did it willingly to embarrass you," said Uran.

- You are wasting your time, for if you tread on me seven times, I will forgive you seven times," answered Haziel, as he grew in stature.

With the memory of those words, the spirit of Uran returned to his material body, awakening him. He had managed to make his dream come true, but it had been of no use to him, for he learned that the most important thing was not the stature of his body, but the greatness of his spirit.

Since then, Uran dedicated himself to forgiveness and proved how those who one day mocked him, stopped doing it.