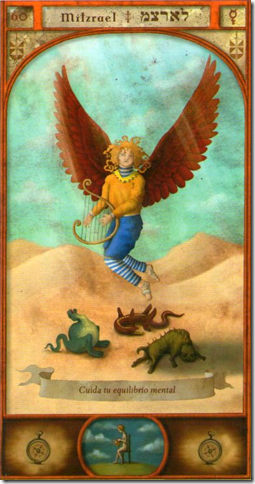 Attribute: God's relief of the oppressed.

[sociallocker id="356″]Those born under his influence will distinguish themselves in society by their talents and noble virtues. He brings together the most beautiful qualities of body and soul. He will know how to signify his mistakes because he understands that it is through experiences that we will build our personality. He will always be in search of himself. Seeking to reach an ideal of balance and wisdom. Being a tireless worker will be his main quality. Under this Angel he will be able to free himself from his karma. He will know how to recognize the hand of God in every detail of nature. From childhood he will be distinguished by his great maturity and will be prepared to succeed. And it is by fulfilling his tasks day by day that he will be at peace with his consciousness. He will be able to be considered a symbol of what it is to be human in its entirety, both physically and spiritually. [/sociallocker]

The Lord is close to those who call upon Him,
of those who truly invoke it.

MITZRAEL: 'THE PRICE OF MADNESS

The story I am about to tell you happened a long time ago and yet I still remember it.

It happened in a faraway place, in the region known as Mermar, that a powerful monarch was giving a great feast in honour of his only son, Prince Mitzrael who had just turned 14.

From all parts of the kingdom they came to congratulate the prince on the birth of his emotional body. From that day on, the young Mitzrael would be responsible for his wishes, and everything he did would be engraved in his royal blood to become part of his particular record.

Soon, very soon, the heir to the throne would come of age and could marry a noble princess, who would be the future queen.

That's why the most beautiful maids would come to the party. They would try to seduce the handsome gallant, calling his attention with their magical beauty.

The royal hall was packed. No one had forgotten to attend the banquet. The music sang melodic songs that delighted everyone present. The tables were served with succulent delicacies, and all were eagerly awaiting the arrival of the host, Prince Mitzrael.

But when everything seemed to be going well, something came to cloud that happiness.

- Your Majesty, I beg you, go quickly to the prince's quarters.

The king was very upset about the delay and thought that it was some joke of his son's, but he would soon realize that he was very much mistaken.

Young Mitzrael had gone mad. His behavior was strange and very aggressive. He was hitting his head and threatening his servants with a sword in his hand.

The king, seeing the danger in the hands of that madman, ran away, calling in terror for the guard to disarm the beast.

- Tie him up if necessary - I order the guard.

Your order was carried out. Within minutes the young Mitzrael had been disarmed and tied up. The news of the prince's madness spread quickly and was already known to all.

Everyone mocked the monarch and many ironically scoffed at him. It didn't take long for them to leave the palace, there was nothing to keep them there. Who would marry a madman? -they all thought.

That misfortune deeply affected the king, I didn't know what to do. Until one day he decided to consult with the sorcerer. He wanted to know what had happened to his son.

- Araf my friend, invoke the wisdom of the spirits, I need to know what evil afflicts the prince. Why has he suddenly gone mad?

- Are you sure you want to know? -I ask the wizard mysteriously.

- What do you mean? -the monarch cried out in anger.

And saying this, the wizard invoked the spirits. After a few minutes he opened his eyes, he had just received the answer.

- At one time, when you were young, you had madness in your heart. You gave life to dishonor, you raped and murdered innocent children, and you believed you were doing it in defense of a just cause. Now that madness is fruit, and that fruit is your child. Rip that shadow from your heart and your child will be healed.

The king admitted in shame that what the wizard had said was true, and if he cared about his son he should purify his feelings by pulling out the weeds of evil.

In the deepest silence, the king fought to overcome the shadow that was chasing him. Until the day came when you succeeded.

Prince Mitzrael woke up that morning and saw the Sun shining on the horizon. A beautiful future awaited him. The past no longer counted.

From that day on, he worked faithfully at his father's side and together they lived a long and happy life.