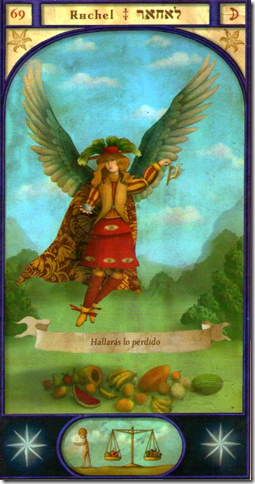 Attribute: God who sees everything.

[sociallocker id="356″]Evolved aspect: those born under this Angel will be endowed with strength and energy, always acting in a beneficial way with the others around them. He will possess a magnificent inventive genius and a strong mission to fulfill with respect to his family. He has a great capacity to participate in the suffering of his loved ones. He is gifted with strong intuition that manifests itself through his analytical intelligence. He will be detached from material impulses and tendencies. He will have great ease of adaptation and willingness to learn. He will never feel intimidated when facing trials and will have to know that every time he loses on the physical plane, he wins on the spiritual one. [/sociallocker]

You, Lord, are my portion and my cup;
it's you who has affirmed my fate.

The peace of the kingdom of Lusol depended on that manuscript signed and sealed by the Sovereign moments before he left his physical body.

His sublime will had many in check in the palace who, like vultures, were fluttering about, hoping that their victim, the dying king, would take them into account when drawing up his will.

- The king is dead," cried a voice from the highest tower of the palace.

Immediately that news was broadcast rapidly, and within a few minutes it was known throughout the kingdom.

The bells of the Sacred Temple rang twelve times as if announcing to heaven the arrival of a new traveler.

Meanwhile and with the anxiety of hungry wolves, the heirs were waiting for news from the royal advisor, who would read the will.

- I, Yesthip as the sole Sovereign of Lusol, in full awareness of my actions, leave in the hands of Rochel...

After that revelation, the counselor could no longer read the manuscript, for the anger of those who hoped to be recognized as heirs to the throne prevented them from doing so.

- No way, the old man was crazy. That will is not valid, we must prevent his will from being carried out," they all said violently.

- ... that nothing and no one can prevent my will from being fulfilled - I finish reading the Counselor.

But those last words were only heard by Rochel, the sole heir.

That would not remain so, the brothers of Rochel were willing to do anything to get the power of the kingdom, and that ambition led them to think a malicious plan.

The next morning, at the crack of dawn, a voice came to call the attention of the future monarch.

- Sir, sir, wake up, for something terrible has happened," enthused the Royal Adviser.

-Calm down and tell me what happened, -expressed Rochel.

-The manuscript of the will is gone, it was stolen in our sleep tonight," said the nervous counsellor.

-It was the work of the brothers, but it will be difficult to prove it. Without a will, the right to the throne will not be recognized.

Young Rochel was right, and the people who caused that disappearance knew that very well.

Late in the morning, Rochel was asked by the Royal Council, as his brothers had requested a special meeting to review the will. It was the excuse they were waiting for to discredit the heir. Not being able to present the will, they would apply for access to the throne by right of age.

Rochel knew he had to act soon. Time was working against him and he had only a few minutes left to decide what to do. He was overwhelmed by everything that was happening and sought a moment of inner peace before facing that betrayal.

Suddenly and in spite of his closed eyes, a light appeared in his mind and without knowing how, a landscape came to life inside him. It was the forest of Lusol. He saw how a hooded man was hiding a paper among some stones. It was the manuscript sealed and signed by the king.

That vision startled him and he came to, regaining consciousness again. He had just seen where the will was and an inner voice told him that he should go to it.

This was how Rochel regained his power as heir and put an end to the malice of his brothers, who were surprised to see how his cunning plans had served them no purpose.